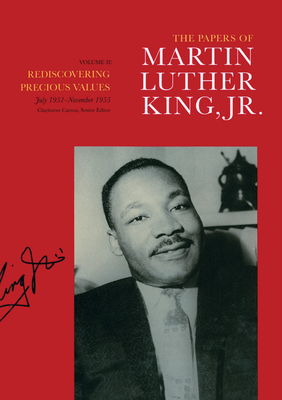 Martin Luther King, Jr.'s ideas—his call for racial equality, his faith in the ultimate triumph of justice, his insistence on the power of nonviolence to bring about a major transformation of American society—are as vital and timely as ever. The wealth of his writings, both published and unpublished, are now preserved in this authoritative, chronologically arranged, multi-volume edition.

Volume Two begins with King's doctoral work at Boston University and ends with his first year as pastor of the historic Dexter Avenue Baptist Church in Montgomery, Alabama. It includes papers from his graduate courses and a fully annotated text of his dissertation. There is correspondence with people King knew in his years prior to graduate school and a transcription of the first known recording of a King sermon. We learn, too, that Boston was where King met his future wife, Coretta Scott.

Accepting the call to serve Dexter, the young King followed the church's tradition of socially active pastors by becoming involved in voter registration and other social justice issues. In Montgomery he completed his doctoral work, and he and Coretta Scott began their marriage.

The Papers of Martin Luther King, Jr. represents a testament to a man whose life and teaching have had a profound influence, not only on Americans, but on people of all nations.

The Martin Luther King, Jr., Papers Project at Stanford University was established by the Center for Nonviolent Social Change, Inc. in 1984.

Clayborne Carson is Director and Senior Editor of the Martin Luther King, Jr. Papers Project and Professor of History at Stanford University. He is the author of In Struggle: SNCC and the Black Awakening of the 1960s, which won the 1982 Frederick Jackson Turner Award. Ralph E. Luker is Associate Professor of History at Antioch College and the author of The Social Gospel in Black and White: American Racial Reform, 1855-1912. Penny A. Russell is completing her dissertation in the History Department at Stanford University. Peter Holloran is a Contributing Editor with the Martin Luther King, Jr., Papers Project.
Loading...
or support indie stores by buying on
(This book is on backorder)