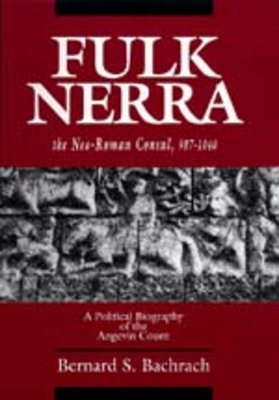 A Political Biography of the Angevin Count

This is the first comprehensive biography of Fulk Nerra, an important medieval ruler, who came to power in his teens and rose to be master in the west of the French Kingdom. Descendant of warriors and administrators who served the French kings, Fulk in turn built the state that provided a foundation for the vast Angevin empire later constructed by his descendants.

Bernard Bachrach finds the terms "constructed" and "built" more than metaphorical in relation to Fulk's career. He shows how Fulk and the Angevin counts who followed him based their long-term state building policy on Roman strategies and fortifications described by Vegetius. This creative adaptation of Roman ideas and tactics, according to Bachrach, was the key to Fulk's successful consolidation of political power. Students of medieval and military history will find here a colorful, impressively researched biography.

Bernard S. Bachrach is Professor of History at the University of Minnesota and fellow of the Medieval Academy of America. His previous books include Early Medieval Jewish Policy in Western Europe (1977).
Loading...
or support indie stores by buying on