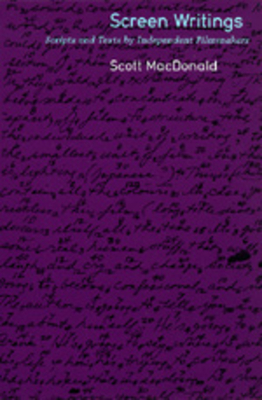 Texts and Scripts from Independent Films

"Ask audience to cut the part of the image on the screen that they don't like. Supply scissors."—Yoko Ono, Tokyo, June 1964

A dazzling range of unconventional film scripts and texts, many published for the first time, make up Scott MacDonald's newest collection. Illustrated with nearly 100 film stills, this fascinating book is at once a reference work of film history and an unparalleled sampling of experimental "language art." It contributes to the very dissipation of boundaries between cinematic, literary, and artistic expression thematized in the films themselves. Each text and script is introduced and contextualized by MacDonald; a filmography and a bibliography round out the volume.

This is a readable—often quite funny—literature that investigates differences between seeing and reading. Represented are avant-garde classics such as Hollis Frampton's Poetic Justice and Zorns Lemma and Morgan Fisher's Standard Gauge, and William Greaves's recently rediscovered Symbiopsychotaxiplasm: Take One. Michael Snow turns film loose on language in So Is This; Peter Rose turns language loose on theory in Pressures of the Text.

Some of the most influential feminist filmscripts of recent decades—Laura Mulvey and Peter Wollen's Riddles of the Sphinx, Su Friedrich's Gently Down the Stream, Trinh T. Minh-ha's Reassemblage, Yvonne Rainer's Privilege—confirm this book's importance for readers in gender and cultural studies as well as for filmmakers and admirers of experimental writing, independent cinema, and the visual arts in general.

Scott MacDonald is Professor of Film Studies and American Literature at Utica College. He is editor of A Critical Cinema and A Critical Cinema 2 (California, 1988, 1992).
Loading...
or support indie stores by buying on