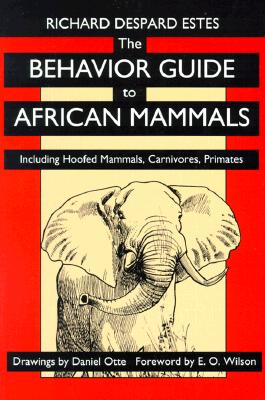 The Behavior Guide to African Mammals

The Behavior Guide to African Mammals is as different from a conventional field guide as motion pictures are from a snapshot. Whether we are able to look at them face to face, on television, or in the hundreds of illustrations provided here by Daniel Otte, this guide allows us to understand what animals do and what their behavior means. Drawing on his own extensive fieldwork and on the research of many other scientists, Richard Estes describes and explains the behavior of four major groups of mammals. Estes's remarkably informative guide is as up-to-date for the zoologist as it is accessible for the interested onlooker.

Richard Estes is a behavioral biologist who has spent more than two decades, including seven years of fieldwork, studying and writing about African mammals. Daniel Otte is Curator and Chairman of the Department of Entomology at the Academy of Natural Sciences, Philadelphia. E. O. Wilson is Frank B. Baird, Jr., Professor of Science and Curator in Entomology at Harvard University and co-author of The Ants (1990).
Loading...
or
Not Currently Available for Direct Purchase