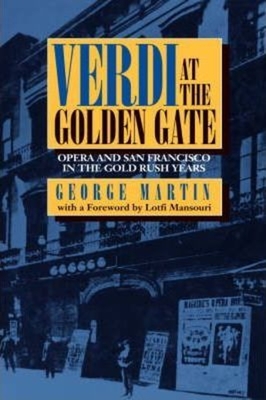 Verdi at the Golden Gate (Hardcover)

Opera and San Francisco in the Gold Rush Years

Opera is a fragile, complex art, but it flourished extravagantly in San Francisco during the Gold Rush years, a time when daily life in the city was filled with gambling, duels, murder, and suicide. In the history of the United States there has never been a rougher town than Gold Rush San Francisco, yet there has never been a greater frenzy for opera than developed there in these exciting years.

How did this madness for opera take root and grow? Why did the audience's generally drunken, brawling behavior gradually improve? How and why did Verdi emerge as the city's favorite composer? These are the intriguing themes of George Martin's enlightening and wonderfully entertaining story. Among the incidents recounted are the fist fight that stopped an opera performance and ended in a fatal duel; and the brothel madam who, by sitting in the wrong row of a theater, caused a fracas that resulted in the formation of the Vigilantes of 1856.

Martin weaves together meticulously gathered social, political, and musical facts to create this lively cultural history. His study contributes to a new understanding of urban culture in the Jacksonian–Manifest Destiny eras, and of the role of opera in cities during this time, especially in the American West. Over it all soars Verdi's somber, romantic music, capturing the melancholy, the feverish joy, and the idealism of his listeners.

George Martin is the author of many books about Verdi and opera generally, among them The Opera Companion (fourth edition, 1991) and Verdi, His Music, Life and Times (fourth edition, 1992). He lives and writes in Kennett Square, Pennsylvania.
or support indie stores by buying on
Copyright © 2020 American Booksellers Association