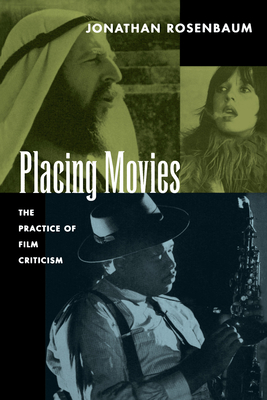 The Practice of Film Criticism

Jonathan Rosenbaum, longtime contributor to such publications as Film Quarterly, Sight and Sound, and The Village Voice, is arguably the most eloquent, insightful film critic writing in America today. Placing Movies, the first collection of his work, gathers together thirty of his most distinctive and illuminating pieces. Written over a span of twenty-one years, these essays cover an extraordinarily broad range of films—from Hollywood blockbusters to foreign art movies to experimental cinema. They include not just reviews but perceptive commentary on directors, actors, and trends; and thoughtful analysis of the practice of film criticism.

It is this last element—Rosenbaum's reflections on the art of film criticism—that sets this collection apart from other volumes of film writing. Both in the essays themselves and in the section introductions, Rosenbaum provides a rare insider's view of his profession: the backstage politics, the formulation of critical judgments, the function of film commentary. Taken together, these pieces serve as a guided tour of the profession of film criticism.

They also serve as representative samples of Rosenbaum's unique brand of film writing. Among the highlights are memoirs of director Jacques Tati and maverick critic Manny Farber, celebrations of classics such as Gentlemen Prefer Blondes and The Manchurian Candidate, and considered reevaluations of Orson Welles and Woody Allen.

Jonathan Rosenbaum, film critic at the Chicago Reader, is author of Greed (1993) and Film: The Front Line 1983. He is also coauthor, with J. Hoberman, of Midnight Movies (1983).
Loading...
or support indie stores by buying on