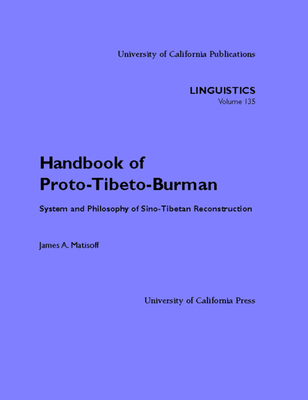 This 800-page volume is a clear and readable presentation of the current state of research on the history of the Tibeto-Burman (TB) language family, a typologically diverse group of over 250 languages spoken in Southern China, the Himalayas, NE India, and peninsular Southeast Asia. The TB languages are the only proven relatives of Chinese, with which they form the great Sino-Tibetan family.

This Handbook builds on the best previous scholarship, and adds up-to-date material that has accumulated over the past 30 years. It contains reconstructions of over a thousand Tibeto-Burman roots, as well as suggested comparisons with several hundred Chinese etyma. It is liberally indexed and cross-referenced for maximum accessibility and internal consistency.

Emphasis is placed on the special theoretical issues involved in historical reconstruction in the East/Southeast Asian linguistic area.

James A. Matisoff, Professor Emeritus of Linguistics at the University of California, Berkeley, is one of the world's leading authorities on the languages of East and Southeast Asia, especially the Sino-Tibetan family. He is the author of numerous books, monographs, and articles, on topics synchronic and diachronic, grammatical, semantic, phonological, and lexicographical, including: The Loloish Tonal Split Revisited (1972), The Grammar of Lahu (1973/1982), Variational Semantics in Tibeto-Burman (1978), Blessings, Curses, Hopes and Fears: Psycho-ostensive Expressions in Yiddish (1979/2000), The Dictionary of Lahu (1988), Languages and Dialects of Tibeto-Burman (1996). He is the Principal Investigator of the Sino-Tibetan Etymological Dictionary and Thesaurus project, and Editor of the journal Linguistics of the Tibeto-Burman Area. He is one of the founders of the annual International Conferences on Sino-Tibetan Languages and Linguistics. He has taught at Columbia and Berkeley, and has directed 28 doctoral dissertations in Asian and general linguistics.
Loading...
or support indie stores by buying on