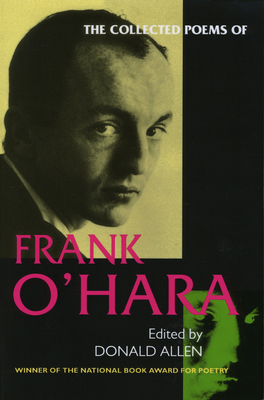 The Collected Poems of Frank O'Hara

Available for the first time in paperback, The Collected Poems of Frank O'Hara reflects the poet's growth as an artist from the earliest dazzling, experimental verses that he began writing in the late 1940s to the years before his accidental death at forty, when his poems became increasingly individual and reflective.

Praise For The Collected Poems of Frank O'Hara…

"During the halcyon days of the Abstract Expressionist and Imaginative Realism movements, Frank O'Hara was the laureate of the New York art scene. . . . A Pan piping on city streets, he luxuriates in the uninhibited play of his imagination. 'My force is in mobility,' he remarks, and indeed his world is full of events—parties, thoughtful acts, homosexual encounters, a painting or film to be commented on—that he reports with a sophisticated naive wonder and generous emotion."
— Herbert A. Liebowitz,

"O'Hara's work seems to me to represent the last stage in the adaptation of twentieth-century avant-garde sensibility to poetry about contemporary American experience. In its music and its language and in its conception of the relation of poetry to the rest of life, it is a poetry which has already changed poets and others, and which promises to go on moving and changing them for a long time to come."
— Kenneth Koch,

Frank O'Hara (1926-1966) was a dynamic leader of the "New York School" of poets, a group that included John Ashbery, Barbara Guest, Kenneth Koch, and James Schuyler. The Abstract Expressionist painters in New York City during the 1950s and 1960s used the title, but the poets borrowed it. From the beginning O'Hara's poetry was engaged with the worlds of music, dance, and painting. In that complex of associations he devised an idea of poetic form that allowed the inclusion of many kinds of events, including everyday conversations and notes about New York advertising signs. Since his death in 1966 at age forty, the depth and richness of his achievements as a poet and art critic have been recognized by an international audience. As the painter Alex Katz remarked, "Frank's business was being an active intellectual." His articulate intelligence made new proposals for poetic form possible in American poetry.

Donald Allen (1912-2004) was Director of Grey Fox Press. Among the literary collections he has edited are The Postmoderns, The Poetics of the New American Poetry, and The Selected Poems of Federico García Lorca; he is the translator of Four Plays of Eugène Ionesco.