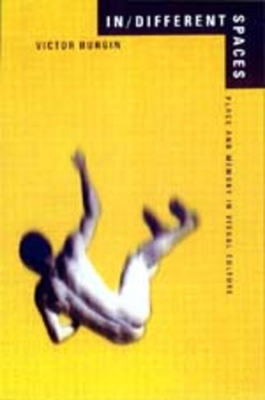 Place and Memory in Visual Culture

Recent discussions about the culture of images have focused on issues of identity—sexual, racial, national—and the boundaries that define subjectivity. In this context Victor Burgin adopts an original critical strategy. He understands images less in traditional terms of the specific institutions that produce them, such as cinema, photography, advertising, and television, and more as hybrid mental constructs composed of fragments derived from the heterogeneous sources that together constitute the "media." Through deft analyses of a photograph by Helmut Newton, Parisian cityscapes, the space of the department store, a film by Ousmane Sembéne, and the writings of Henri Lefebvre, Andrè Breton, and Roland Barthes, Burgin develops an incisive theory of our culture of images and spectacle.

In/Different Spaces explores the construction of identities in the psychical space between perception and consciousness, drawing upon psychoanalytic theories to describe the constitution and maintenance of "self" and "us"—in imaginary spatial and temporal relations to "other" and "them"—through the all-important relay of images. For Burgin, the image is never a transparent representation of the world but rather a principal player on the stage of history.