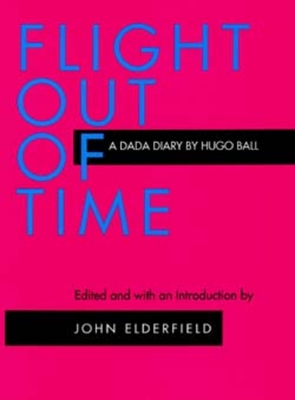 Flight Out of Time

Hugo Ball—poet, philosopher, novelist, cabaret performer, journalist, mystic—was a man extremely sensitive to the currents of his time and carried in their wake. In February 1916 he founded the Cabaret Voltaire in Zurich. The sound poems and performance art by Ball and the other artists who gathered there were the beginnings of Dada. Ball's extraordinary diaries, one of the most significant products of the Dada movement, are here available in English in paperback for the first time, along with the original Dada manifesto and John Elderfield's critical introduction, revised and updated for the paperback edition, and a supplementary bibliography of Dada texts that have appeared since the 1974 hardcover edition of this book.

Hugo Ball (1886-1927) was the author of Herman Hesse, His Life and Work and Flight Out of Time, his edited diaries from 1910-1921, published in German editions in 1927. John Elderfield is Chief Curator at Large at The Museum of Modern Art, New York, and the author of books on Henri Matisse, Kurt Schwitters, and others.
or support indie stores by buying on