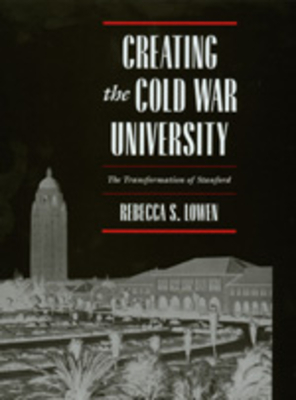 The Transformation of Stanford

The "cold war university" is the academic component of the military-industrial-academic complex, and its archetype, according to Rebecca Lowen, is Stanford University. Her book challenges the conventional wisdom that the post-World War II "multiversity" was created by military patrons on the one hand and academic scientists on the other and points instead to the crucial role played by university administrators in making their universities dependent upon military, foundation, and industrial patronage.

Contesting the view that the "federal grant university" originated with the outpouring of federal support for science after the war, Lowen shows how the Depression had put financial pressure on universities and pushed administrators to seek new modes of funding. She also details the ways that Stanford administrators transformed their institution to attract patronage.

With the end of the cold war and the tightening of federal budgets, universities again face pressures not unlike those of the 1930s. Lowen's analysis of how the university became dependent on the State is essential reading for anyone concerned about the future of higher education in the post-cold war era.

Rebecca S. Lowen is currently Visiting Scholar in History at the University of California, San Diego.
Loading...
or support indie stores by buying on