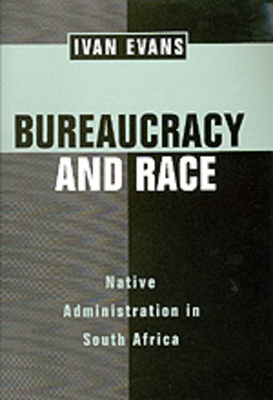 Bureaucracy and Race overturns the common assumption that apartheid in South Africa was enforced only through terror and coercion. Without understating the role of violent intervention, Ivan Evans shows that apartheid was sustained by a great and ever-swelling bureaucracy. The Department of Native Affairs (DNA), which had dwindled during the last years of the segregation regime, unexpectedly revived and became the arrogant, authoritarian fortress of apartheid after 1948. The DNA was a major player in the prolonged exclusion of Africans from citizenship and the establishment of a racially repressive labor market.

Exploring the connections between racial domination and bureaucratic growth in South Africa, Evans points out that the DNA's transformation of oppression into "civil administration" institutionalized and, for whites, legitimized a vast, coercive bureaucratic culture, which ensnared millions of Africans in its workings and corrupted the entire state. Evans focuses on certain features of apartheid—the pass system, the "racialization of space" in urban areas, and the cooptation of African chiefs in the Bantustans—in order to make it clear that the state's relentless administration, not its overtly repressive institutions, was the most distinctive feature of South Africa in the 1950s.

All observers of South Africa past and present and of totalitarian states in general will follow with interest the story of how the Department of Native Affairs was crucial in transforming "the idea of apartheid" into a persuasive—and all too durable—practice.

Ivan Evans is Assistant Professor of Sociology at the University of California, San Diego.
Loading...
or support indie stores by buying on