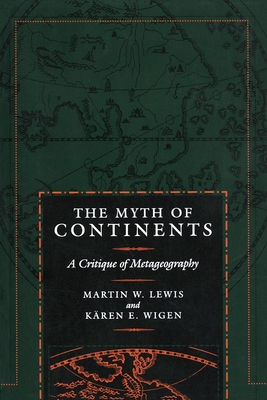 The Myth of Continents

A Critique of Metageography

In this thoughtful and engaging critique, geographer Martin W. Lewis and historian Kären Wigen reexamine the basic geographical divisions we take for granted, and challenge the unconscious spatial frameworks that govern the way we perceive the world. Arguing that notions of East vs. West, First World vs. Third World, and even the sevenfold continental system are simplistic and misconceived, the authors trace the history of such misconceptions. Their up-to-the-minute study reflects both on the global scale and its relation to the specific continents of Europe, Asia, and Africa—actually part of one contiguous landmass.

The Myth of Continents sheds new light on how our metageographical assumptions grew out of cultural concepts: how the first continental divisions developed from classical times; how the Urals became the division between the so-called continents of Europe and Asia; how countries like Pakistan and Afghanistan recently shifted macroregions in the general consciousness.

This extremely readable and thought-provoking analysis also explores the ways that new economic regions, the end of the cold war, and the proliferation of communication technologies change our understanding of the world. It stimulates thinking about the role of large-scale spatial constructs as driving forces behind particular worldviews and encourages everyone to take a more thoughtful, geographically informed approach to the task of describing and interpreting the human diversity of the planet.

Praise For The Myth of Continents: A Critique of Metageography…

"The very fact that their work stimulates such questions is a tribute to the authors. In The Myth of Continents, Lewis and Wigen have written an entertaining and informative account of the way our maps show us the world that we want to see."
— New York Times

"A solid and useful contribution."
— Journal of World History

Martin W. Lewis is Associate Research Professor of Geography, Duke University, and author of Wagering the Land: Ritual, Capital, and Environmental Degradation in the Cordillera of Northern Luzon, 1900-1986 (California, 1992) and Green Delusions: An Environmentalist Critique of Radical Environmentalism (1994). Kären E. Wigen is Associate Professor of History, Duke University, and author of The Making of a Japanese Periphery, 1750-1920 (California, 1995).
Loading...
or support indie stores by buying on