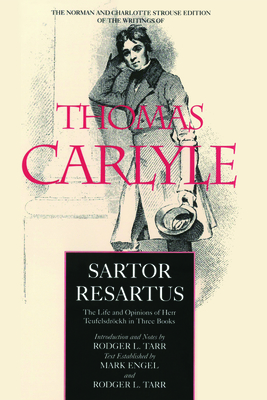 Sartor Resartus is Thomas Carlyle's most enduring and influential work. First published in serial form in Fraser's Magazine in 1833-1834, it was discovered by the American Transcendentalists. Sponsored by Ralph Waldo Emerson, it was first printed as a book in Boston in 1836 and immediately became the inspiration for the Transcendental movement. The first London trade edition was published in 1838. By the 1840s, largely on the strength of Sartor Resartus, Carlyle became one of the leading literary figures in Britain.

Sartor Resartus became one of the important texts of nineteenth-century English literature, central to the Romantic movement and Victorian culture. At the time of Carlyle's death in 1881, more than 69,000 copies had been sold. The post-Victorian influence continued and extends to writers as diverse as Virginia Woolf and James Joyce, Willa Cather and Ernest Hemingway.

This edition of Sartor Resartus is the first publication of the work that uses all extant versions to create an accurate authorial text. This volume, the second in an eight-volume series, includes a complete textual apparatus as well as a historical introduction and full critical and explanatory annotation.