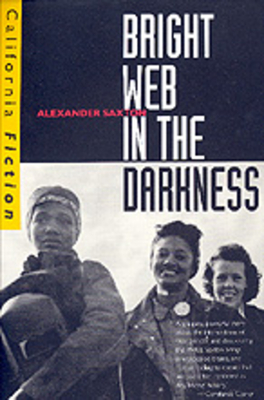 A largely ignored World War II story that sheds light on labor, race, and friendship in the shipyards of Richmond, California.
Set in the San Francisco Bay area during World War II, Bright Web in the Darkness is a novel that illuminates the role of women workers during the war and the efforts of African Americans to achieve regular standing as union members. The central characters are two young women—one black, one white—who meet in a welding class and become friends as they work to qualify for the well-paid jobs opening to women as male workers are drafted. Sensitively and presciently written, this novel addresses social issues that still demand our attention.

Praise For Bright Web in the Darkness (California Fiction)…

"A novel of substance and candor. . . . Slowly but surely, Alexander Saxton seems to be saying in this strong novel, America is emerging from the dark ages of racial prejudice and discrimination."
— Chicago Tribune

"A forceful, well-constructed novel of love and war, prejudice and injustice. . . . Mr. Saxton's book documents an area of the World War II story that has been largely ignored in fiction. He deals with it honestly and well in a novel that has its roots in the truth."
— San Francisco Chronicle

Alexander Saxton (1919-2012) was the author of The Indispensable Enemy: Labor and the Anti-Chinese Movement (California reissue 1996), The Rise and Fall of the White Republic (1991), and the novel Great Midland, and was Professor Emeritus of History at the University of California, Los Angeles. Tillie Olsen is the author of Tell Me A Riddle and Yonnondio.
Loading...
or
Not Currently Available for Direct Purchase