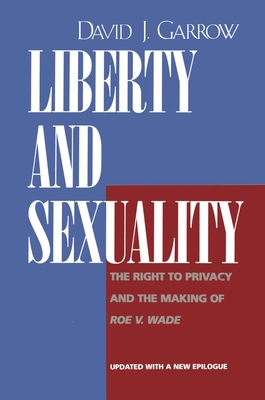 The Right to Privacy and the Making of Roe v. Wade, Updated

Liberty and Sexuality is a definitive account of the legal and political struggles that created the right to privacy and won constitutional protection for a woman's right to choose abortion.

Roe v. Wade, the landmark 1973 U.S. Supreme Court ruling that established that right, grew out of not only efforts to legalize abortion but also out of earlier battles against statutes that criminalized birth control. When the U.S. Supreme Court in 1965, in Griswold v. Connecticut, voided such a prohibition as an outrageous intrusion upon marital privacy, it opened a previously unimagined constitutional door: the opportunity to argue that a woman's access to a safe, legal abortion was also a fundamental constitutional right.

In this updated and expanded paperback edition, Garrow also traces the post-Roe evolution of abortion rights battles and the wider struggle for sexual privacy up through the 25th anniversary of Roe in early 1998.

Praise For Liberty and Sexuality: The Right to Privacy and the Making of Roe v. Wade, Updated…

"Riveting. . . . A fascinating account of the inner workings of the Court."
— Journal of American History

"When Garrow writes, the discerning reader ought to read. . . . Garrow has set an exacting standard for the presentation of the history of public policy issues. . . . This is truly indispensable to understanding how the abortion controversy arose. Highly recommended for public and academic libraries."
— Library Journal

"Drawing on hundreds of interviews, Garrow profiles key advocates of the liberalization or repeal of anti-abortion laws in the decades preceding Roe."
— Publishers Weekly

David J. Garrow is Presidential Distinguished Professor at Emory University's School of Law. He received the Pulitzer Prize and the Robert F. Kennedy Award for his biography of Martin Luther King, Bearing the Cross (1986). His earlier books include The FBI and Martin Luther King, Jr. (1981) and Protest at Selma (1978).
Loading...
or support indie stores by buying on