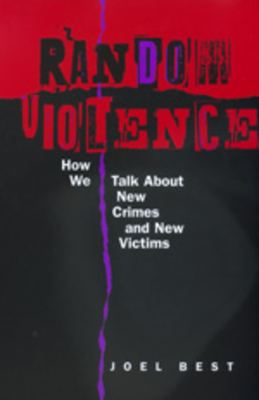 How We Talk about New Crimes and New Victims

Random Violence is a deft and thought-provoking exploration of the ways we talk about—and why we worry about—new crimes and new forms of victimization. Focusing on so-called random crimes such as freeway shootings, gang violence, hate crimes, stalking, and wilding, Joel Best shows how new crime problems emerge and how some quickly fade from public attention while others spread and become enduring subjects of concern. Best's original and incisive argument illuminates the fact that while these crimes are in actuality neither new, nor epidemic, nor random, the language used to describe them nonetheless shapes both private fears and public policies.

Best scrutinizes the melodramatic quality of the American public's attitudes toward crime, exposing the cultural context for the popularity of "random violence" as a catch-all phrase to describe contemporary crime, and the fallacious belief that violence is steadily rising. He points out that the age, race, and sex of homicide victims reveal that violence is highly patterned.

Best also details the contemporary ideology of victimization, as well as the social arrangements that create and support a victim industry that can label large numbers of victims. He demonstrates why it has become commonplace to "declare war" on social problems, including drugs, crime, poverty, and cancer, and outlines the complementary influence of media, activists, officials, and experts in institutionalizing crime problems. Intrinsic to all these concerns is the way in which policy choices and outcomes are affected by the language used to describe social problems.

Joel Best is Professor of Sociology at Southern Illinois University at Carbondale. He is the author of Threatened Children: Rhetoric and Concern about Child-Victims (1990).
Loading...
or support indie stores by buying on