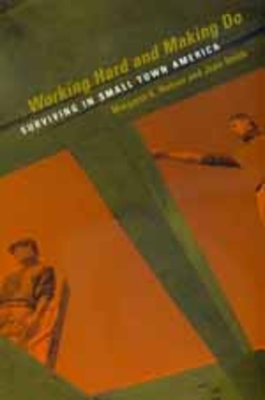 Working Hard and Making Do

The economic recovery of the 1990s brought with it a surge of new jobs, but the prospects for most working Americans improved little. Family income rose only slightly and the period witnessed a significant degradation of the quality of work as well as in what people could expect from their waged employment. In this book, Margaret K. Nelson and Joan Smith take a look inside the households of working-class Americans to consider how they are coping with large-scale structural changes in the economy, specifically how the downgrading of jobs has affected survival strategies, gender dynamics, and political attitudes.

Drawing on both randomly distributed telephone surveys and in-depth interviews, Nelson and Smith explore the differences in the survival strategies of two groups of working-class households in a rural county: those in which at least one family member has been able to hold on to good work (a year-round, full-time job that carries benefits) and those in which nobody has been able to secure or retain steady employment. They find that households with good jobs are able to effectively use all of their labor power—they rely on two workers; they engage in on-the-side businesses; and they barter with friends and neighbors. In contrast, those living in families without at least one good job find themselves considerably less capable of deploying a complex, multi-faceted survival strategy. The authors further demonstrate that this difference between the two sets of households is accompanied by differences in the gender division of labor within the household and the manner in which individuals make sense of, and respond to, their employment.

Margaret K. Nelson is A. Barton Hepburn Professor of Sociology at Middlebury College. She is the author of Negotiated Care: The Experiences of Family Day Care Providers (1991). Joan Smith is Dean of the College of Arts and Sciences at the University of Vermont. She is the author of Creating and Transforming Households: The Constraints of the World Economy (1992).
or support indie stores by buying on