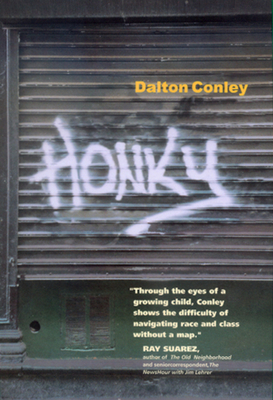 This intensely personal and engaging memoir is the coming-of-age story of a white boy growing up in a neighborhood of predominantly African American and Latino housing projects on New York’s Lower East Side. Vividly evoking the details of city life from a child’s point of view—the streets, buses, and playgrounds—Honky poignantly illuminates the usual vulnerabilities of childhood complicated by unusual circumstances. As he narrates these sharply etched and often funny memories, Conley shows how race and class shaped his life and the lives of his schoolmates and neighbors. A brilliant case study for illuminating the larger issues of inequality in American society, Honky brings us to a deeper understanding of the privilege of whiteness, the social construction of race, the power of education, and the challenges of inner-city life.

Conley’s father, a struggling artist, and his mother, an aspiring writer, joined Manhattan’s bohemian subculture in the late 1960s, living on food stamps and raising their family in a housing project. We come to know his mother: her quirky tastes, her robust style, and the bargains she strikes with Dalton—not to ride on the backs of buses, and to always carry money in his shoe as protection against muggers. We also get to know his father, his face buried in racing forms, and his sister, who in grade school has a burning desire for cornrows. From the hilarious story of three-year-old Dalton kidnapping a black infant so he could have a baby sister to the deeply disturbing shooting of a close childhood friend, this memoir touches us with movingly rendered portraits of people and the unfolding of their lives.

Conley’s story provides a sophisticated example of the crucial role culture plays in defining race and class. Both of Conley’s parents retained the "cultural capital" of the white middle class, and they passed this on to their son in the form of tastes, educational expectations, and a general sense of privilege. It is these advantages that ultimately provide Conley with his ticket to higher education and beyond. A tremendously good read, Honky addresses issues both timely and timeless that pertain to us all.

Dalton Conley is Director of the Center for Advanced Social Science Research and Professor of Sociology and Public Policy at NYU; he is also Research Associate at the National Bureau of Economic Research and Adjunct Professor of Community Medicine at Mt. Sinai School of Medicine. He is author of Being Black, Living in the Red: Race, Wealth, and Social Policy in America (California, 1999).
or support indie stores by buying on
Copyright © 2020 American Booksellers Association