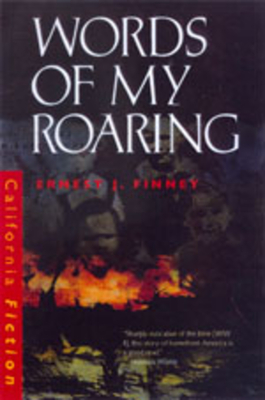 Words of My Roaring (California Fiction)

Set in a small town south of San Francisco during World War II, Words of My Roaring is a compelling picture of the confusions, the dislocations, and the brutality of war as they affect the home front. The novel recreates a neighborhood in San Bruno and connects it to San Francisco and the larger stage of the war. Tanforan racetrack, first an assembly camp for Japanese Americans awaiting internment, becomes a naval training base for Pacific-bound recruits. The elementary school becomes a USO, and air-raid drills and blackouts are routine as California prepares for an expected Japanese invasion. We see these events through the eyes of a novice teacher, an abandoned boy, two young girls whose mother works in the shipyards and whose father enlists in the Army, and a sailor scarred by his months in the war zone. Words of My Roaring is a richly textured, emotionally charged novel about the unlikely sources of human redemption.

Ernest J. Finney grew up on the peninsula just south of San Francisco and now divides his time between that city and the San Joaquin Valley. His books include the novels California Time (1998), Lady with the Alligator Purse (1992) and Winterchill (1989), and the short story collections Flights in the Heavenlies (1996) and Birds Landing (1986).
Loading...
or support indie stores by buying on