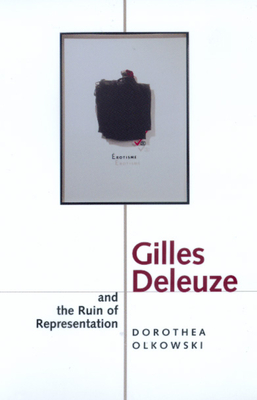 Gilles Deleuze and the Ruin of Representation

Dorothea Olkowski's exploration of the philosophy of Gilles Deleuze clarifies the gifted French thinker's writings for specialists and nonspecialists alike. Deleuze, she says, accomplished the "ruin of representation," the complete overthrow of hierarchic, organic thought in philosophy, politics, aesthetics, and ethics, as well as in society at large. In Deleuze's philosophy of difference, she discovers the source of a new ontology of change, which in turn opens up the creation of new modes of life and thought, not only in philosophy and feminism but wherever creation is at stake.

The work of contemporary artist Mary Kelly has been central to Olkowski's thinking. In Kelly she finds an artist at work whose creative acts are in themselves the ruin of representation as a whole, and the text is illustrated with Kelly's art. This original and provocative account of Deleuze contributes significantly to a critical feminist politics and philosophy, as well as to an understanding of feminist art.

Dorothea Olkowski is Associate Professor of Philosophy at the University of Colorado, Colorado Springs. She coedited Gilles Deleuze and the Theatre of Philosophy (1992).
Loading...
or support indie stores by buying on