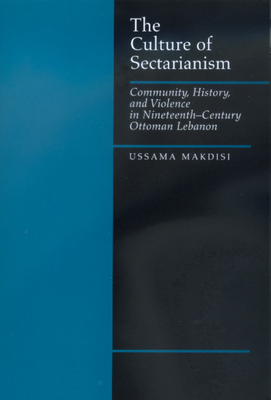 The Culture of Sectarianism

Focusing on Ottoman Lebanon, Ussama Makdisi shows how sectarianism was a manifestation of modernity that transcended the physical boundaries of a particular country. His study challenges those who have viewed sectarian violence as an Islamic response to westernization or simply as a product of social and economic inequities among religious groups. The religious violence of the nineteenth century, which culminated in sectarian mobilizations and massacres in 1860, was a complex, multilayered, subaltern expression of modernization, he says, not a primordial reaction to it.

Makdisi argues that sectarianism represented a deliberate mobilization of religious identities for political and social purposes. The Ottoman reform movement launched in 1839 and the growing European presence in the Middle East contributed to the disintegration of the traditional Lebanese social order based on a hierarchy that bridged religious differences. Makdisi highlights how European colonialism and Orientalism, with their emphasis on Christian salvation and Islamic despotism, and Ottoman and local nationalisms each created and used narratives of sectarianism as foils to their own visions of modernity and to their own projects of colonial, imperial, and national development. Makdisi's book is important to our understanding of Lebanese society today, but it also makes a significant contribution to the discussion of the importance of religious discourse in the formation and dissolution of social and national identities in the modern world.


Praise For The Culture of Sectarianism: Community, History, and Violence in Nineteenth-Century Ottoman Lebanon…

"This work is a meticulous deconstruction of sectarianism as a discourse spawned by a particular historic conjecture—Ottoman reform in the age of European domination—in and around the tiny peripheral society of 19th-century Mount Lebanon. It is also an impassioned insistence not only on the historic but also the moral urgency of recognizing the contingency of, and the human agency in, the emergence of sectarianism and an invitation for hope in a Lebanese future that might yet dare to embrace an alternative modernity. Makdisi's book is not only illuminated by the scholar's insight; it is also animated by empathy for his subject matter and a talent that brings local society and its mountainous vistas vividly to the mind's eye."
— International Journal of Middle East Studies

"The Culture of Sectarianism is a thoughtful and exciting book. . . . that makes a difference in our understanding of Lebanese history, sectarianism, and national identity."
— Middle East Journal

"Unique in style, analysis and conclusions . . . [and] well researched and well written. Not only does it use narratives, among other things, to reconstruct the history of sectarian clashes that befell Mount Lebanon between 1940 and 1960, but it is a history told in a narrative style."
— Middle Eastern Studies

"A fine book . . . Historians of India and the Middle East have often insisted that sectarianism is a creation of modern colonialism, tending to view it as a distortion of secular nationalism. Makdisi's work challenges them on these issues in its call for the study of sectarianism, not as the underbelly of nationalism, but as a modern form of knowledge and sensibility that has spawned a specific cultural outlook."
— Journal of Interdisciplinary History

Ussama Makdisi is Professor of History and the first Arab-American Educational Foundation Chair of Arab Studies at Rice University. He is the author of Age of Coexistence, Artillery of Heaven, and Faith Misplaced.
Loading...
or support indie stores by buying on