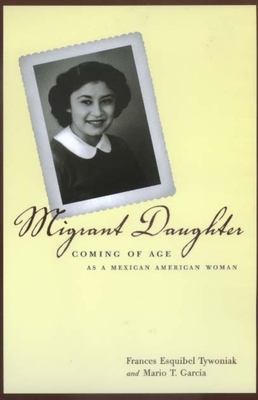 Coming of Age as a Mexican American Woman

Taking us from the open spaces of rural New Mexico and the fields of California's Great Central Valley to the intellectual milieu of student life in Berkeley during the 1950s, this memoir, based on an oral history by Mario T. García, is the powerful and moving testimonio of a young Mexican American woman's struggle to rise out of poverty. Migrant Daughter is the coming-of-age story of Frances Esquibel Tywoniak, who was born in Spanish-speaking New Mexico, moved with her family to California during the Depression to attend school and work as a farm laborer, and subsequently won a university scholarship, becoming one of the few Mexican Americans to attend the University of California, Berkeley, at that time. Giving a personal perspective on the conflicts of living in and between cultures, this eloquent story provides a rare glimpse into the life of a young Mexican American woman who achieved her dreams of obtaining a university education.

In addition to the many fascinating details of everyday life the narrative provides, Mario T. García's introduction contextualizes the place and importance of Tywoniak's life. Both introduction and narrative illustrate the process by which Tywoniak negotiated her relation to ethnic identity and cultural allegiances, the ways in which she came to find education as a channel for breaking with fieldwork patterns of life, and the effect of migration on family and culture. This deeply personal memoir portrays a courageous Mexican American woman moving between many cultural worlds, a life story that at times parallels, and at times diverges from, the real life experiences of thousands of other, unnamed women.

Frances Esquibel Tywoniak is a retired teacher and administrator in the San Francisco School District. Mario T. García is Professor of History and Chicano Studies at the University of California, Santa Barbara, and the author of Memories of Chicano History: The Life and Narrative of Bert Corona (California, 1994) and editor of Ruben Salazar's Border Correspondent: Selected Writings, 1955-1970 (California, 1995).
or support indie stores by buying on
Copyright © 2020 American Booksellers Association