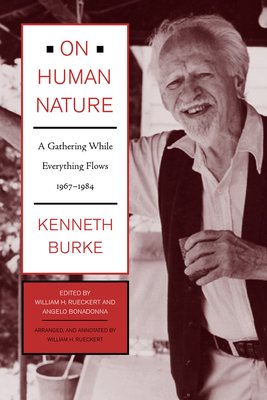 On Human Nature: A Gathering While Everything Flows brings together the late essays, autobiographical reflections, an interview, and a poem by the eminent literary theorist and cultural critic Kenneth Burke (1897-1993). Burke, author of Language as Symbolic Action, A Grammar of Motives, and Rhetoric of Motives, among other works, was an innovative and original thinker who worked at the intersection of sociology, psychology, literary theory, and semiotics. This book, a selection of fourteen representative pieces of his productive later years, addresses many important themes Burke tackled throughout his career such as logology (his attempt to find a universal language theory and methodology), technology, and ecology. The essays also elaborate Burke's notions about creativity and its relation to stress, language and its literary uses, the relation of mind and body, and more. Provocative, idiosyncratic, and erudite, On Human Nature makes a significant statement about cultural linguistics and is an important rounding-out of the Burkean corpus.

Kenneth Burke was a self-taught thinker who attempted to integrate scientific and philosophical concepts with his analysis of semantics and literature. Between 1927 and 1929, Burke worked for the Dial as a music critic. After a brief stint with The Nation (1934-36), he turned to literary criticism and taught at Bennington College from 1943 to 1961. His many works have all been published by the University of California Press.
Loading...
or support indie stores by buying on