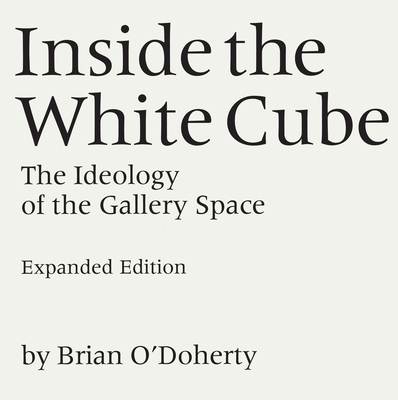 Inside the White Cube (Paperback)

The Ideology of the Gallery Space, Expanded Edition

When these essays first appeared in Artforum in 1976, their impact was immediate. They were discussed, annotated, cited, collected, and translated—the three issues of Artforum in which they appeared have become nearly impossible to obtain. Having Brian O'Doherty's provocative essays available again is a signal event for the art world. This edition also includes "The Gallery as Gesture," a critically important piece published ten years after the others.

O'Doherty was the first to explicitly confront a particular crisis in postwar art as he sought to examine the assumptions on which the modern commercial and museum gallery was based. Concerned with the complex and sophisticated relationship between economics, social context, and aesthetics as represented in the contested space of the art gallery, he raises the question of how artists must construe their work in relation to the gallery space and system.

These essays are essential reading for anyone interested in the history and issues of postwar art in Europe and the United States. Teeming with ideas, relentless in their pursuit of contradiction and paradox, they exhibit both the understanding of the artist (Patrick Ireland) and the precision of the scholar.

With an introduction by Thomas McEvilley and a brilliantly cogent afterword by its author, Brian O'Doherty once again leads us on the perilous journey to center to the art world: Inside the White Cube.

Brian O'Doherty, a.k.a. Patrick Ireland, is an artist and writer. His work has been shown in numerous galleries and museums in the United States and Europe. His books include Object and Idea and American Masters: The Voice and the Myth.

Praise For Inside the White Cube: The Ideology of the Gallery Space, Expanded Edition…

"Not only in the context of art institutions and gallery spaces, but also in broader territorial and political senses, the dichotomy between inside and outside has become a cornerstone of what we would now call installation art. Thus, we should not only read Inside the White Cube as the vital document of the 1970s post-studio art scene that it undoubtedly is, but also as a nodal point that connects in two directions: backwards to the modern history of art, and forwards to contemporary spatial practices."
— e-flux

"Brian O’Doherty’s precise scrutiny of this near-omnipresent mode of display—the result of a worldview in which the apparatus of exhibition was newly understood as itself the carrier of meaning—still retains disruptive power."
— Art Journal
or support indie stores by buying on
Copyright © 2020 American Booksellers Association