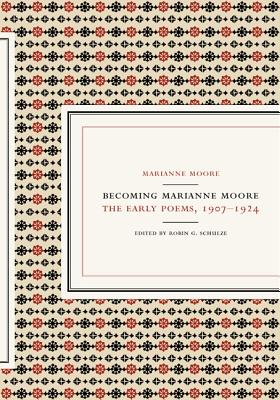 Throughout her lifetime, Marianne Moore was an avid editor of her own verse. The bulk of her poems appear in numerous, at times vastly different published versions. For Moore, no text was ever stable or finished; each opportunity to publish offered an opportunity to revise. Becoming Marianne Moore gives scholars and readers access to the multiple variant versions of Moore's poems published between 1907 and 1924. An innovative, deeply contextualized facsimile edition of the poet's published early verse, it brilliantly demonstrates that modernist textuality is not a fixed, static product but an ongoing, fluid process.

Becoming Marianne Moore offers readers a full facsimile reprint of the first edition of Observations (1924), the book that garnered Moore the Dial Award for Literature and solidified her reputation as a modernist poet of note. The reprint is followed by a collection of facsimiles that presents each of Moore's poems published between 1907 and 1924 as it first appeared in a modernist little magazine. Each facsimile is accompanied by a variorum table that gives scholars quick access to all of the published changes that Moore made to each poem and a series of brief bibliographical notes that supply information about the immediate publication contexts of all of the presentations of the poem. These notes, in turn, point readers to narrative accounts of Moore's associations with her early publishers that offer a range of historical, contextual, biographical, and bibliographic information about the publication events of Moore's poems and explore her attempts to shape her literary career in concert with some of her most famous modernist peers--Richard Aldington, H.D., Harriet Monroe, Ezra Pound, and William Carlos Williams.

A wonderful fusion of historical research and critical sensitivity, Becoming Marianne Moore will change the way people think about Moore's verse and modernist textuality in general. A powerful intervention into Moore studies, it gives readers a broader sense of the poet's complex and brilliant career.

Robin G. Schulze is an Associate Professor of English at Pennsylvania State University. She is the author of The Web of Friendship: Marianne Moore and Wallace Stevens (1995).
Loading...
or support indie stores by buying on