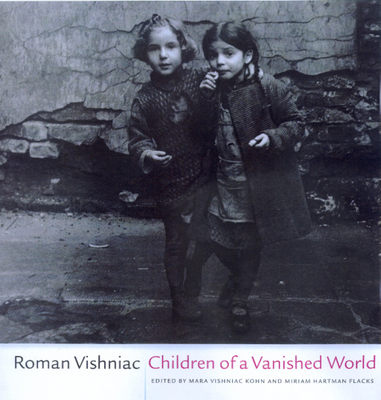 Children of a Vanished World

Between 1935 and 1938 the celebrated photographer Roman Vishniac explored the cities and villages of Eastern Europe, capturing life in the Jewish shtetlekh of Poland, Romania, Russia, and Hungary, communities that even then seemed threatened—not by destruction and extermination, which no one foresaw, but by change. Using a hidden camera and under difficult circumstances, Vishniac was able to take over sixteen thousand photographs; most were left with his father in a village in France for the duration of the war. With the publication of Children of a Vanished World, seventy of those photographs are available, thirty-six for the first time. The book is devoted to a subject Vishniac especially loved, and one whose mystery and spontaneity he captured with particular poignancy: children.

Selected and edited by the photographer's daughter, Mara Vishniac Kohn, and translator and coeditor Miriam Hartman Flacks, these images show children playing, children studying, children in the midst of a world that was about to disappear. They capture the daily life of their subjects, at once ordinary and extraordinary. The photographs are accompanied by a selection of nursery rhymes, songs, poems, and chants for children's games in both Yiddish and English translation. Thanks to Vishniac's visual artistry and the editors' choice of traditional Yiddish verses, a part of this wonderful culture can be preserved for future generations.

A major exhibition titled "Children of a Vanished World: Photographs byRoman Vishniac" is scheduled at the Museum of Jewish Heritage in New York. The show will open to the public on March 7 and run through June 4, 2000.

Mara Vishniac Kohn is an educational therapist who has spent most of her professional life in private special education. Miriam Hartman Flacks, a Brooklyn-born native Yiddish speaker, seeks to preserve the rich tradition of Yiddish folksongs.
Loading...
or support indie stores by buying on