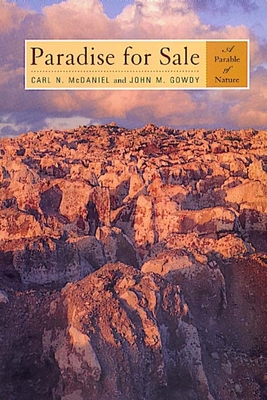 A Parable of Nature

The grim history of Nauru Island, a small speck in the Pacific Ocean halfway between Hawaii and Australia, represents a larger story of environmental degradation and economic dysfunction. For more than 2,000 years traditional Nauruans, isolated from the rest of the world, lived in social and ecological stability. But in 1900 the discovery of phosphate, an absolute requirement for agriculture, catapulted Nauru into the world market. Colonial imperialists who occupied Nauru and mined it for its lucrative phosphate resources devastated the island, which forever changed its native people. In 1968 Nauruans regained rule of their island and immediately faced a conundrum: to pursue a sustainable future that would protect their truly valuable natural resources—the biological and physical integrity of their island—or to mine and sell the remaining forty-year supply of phosphate and in the process make most of their home useless. They did the latter.

In a captivating and moving style, the authors describe how the island became one of the richest nations in the world and how its citizens acquired all the ills of modern life: obesity, diabetes, heart disease, hypertension. At the same time, Nauru became 80 percent mined-out ruins that contain severely impoverished biological communities of little value in supporting human habitation.

This sad tale highlights the dire consequences of a free-market economy, a system in direct conflict with sustaining the environment. In presenting evidence for the current mass extinction, the authors argue that we cannot expect to preserve biodiversity or support sustainable habitation, because our economic operating principles are incompatible with these activities.

Carl N. McDaniel is Professor of Biology and Director of Undergraduate Environmental Science at Rensselaer Polytechnic Institute. John M. Gowdy is Professor of Economics and Director of the Ph.D. program in Ecological Economics at Rensselaer Polytechnic Institute. He is editor of Limited Wants, Limited Means (1997).
or support indie stores by buying on