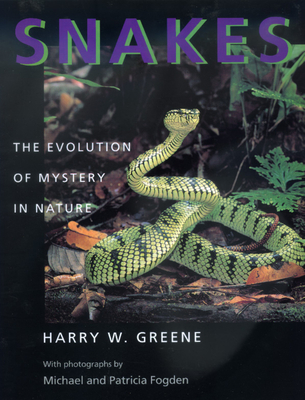 The Evolution of Mystery in Nature

This is a book about some of nature's most alluring and forbidding creatures, written by a man with an abiding passion for snakes, as well as for science, the fate of the planet, and the wonder of life. Harry Greene presents every facet of the natural history of snakes—their diversity, evolution, and conservation—and at the same time makes a personal statement of why these animals are so compelling.

This book provides an up-to-date summary of the biology of snakes on a global basis. Eight chapters are devoted to general biology topics, including anatomy, feeding, venoms, predation and defense, social behavior, reproduction, evolution, and conservation; eight chapters survey the major snake groups, including blindsnakes, boas, colubrids, stiletto snakes, cobras, sea snakes, and vipers. Details of particular interest, such as coral snake mimicry and the evolution of the0 rattle, are highlighted as special topics. Chapter introductory essays are filled with anecdotes that will tempt nonspecialists to read on, while the book's wealth of comprehensive information will gratify herpeto-culturalists and professional biologists.

Greene's writing is clear, engaging, and full of appreciation for his subject. Michael and Patricia Fogden are known internationally for their outstanding work, and their stunning color photographs of snakes in their natural habitats are a brilliant complement to Greene's text. Here is a scientific book that provides accurate information in an accessible way to general readers, strongly advocates for a persecuted group of animals, encourages conservation—not just of snakes but of ecosystems—and credits science for enriching our lives. In helping readers explore the role of snakes in human experience, Greene and the Fogdens show how science and art can be mutual pathways to understanding.

Harry W. Greene is Professor in the Department of Ecology and Evolutionary Biology at Cornell University. He was formerly the Curator of Herpetology the Museum of Vertebrate Zoology, and Professor in the Department of Integrative Biology at the University of California, Berkeley, where he won the campuswide Distinguished Teaching Award in 1993. In 2000, he was awarded the third Edward Osborne Wilson Naturalist Award, presented by the American Society of Naturalists. Michael and Patricia Fogden are acclaimed nature photographers whose work has appeared in such publications as Smithsonian and Natural History, and in books published by Time-Life, National Geographic, and Audubon. They live in Costa Rica.
or
Not Currently Available for Direct Purchase
Copyright © 2020 American Booksellers Association