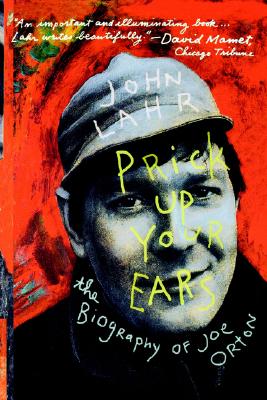 Prick Up Your Ears

The Biography of Joe Orton

John Lahr--New Yorker critic, novelist, and biographer of his father Bert Lahr (Notes on a Cowardly Lion)--reconstructs both the life and death of Joe Orton in another extraordinary biography that was chosen Book of the Year by Truman Capote and Nobel Prize-winning novelist Patrick White when it first appeared in 1978. "I have high hopes of dying in my prime," Joe Orton confided to his diary in July, 1967. Less than one month later, Britain's most promising comic playwright was murdered by his lover in the London flat they had shared for fifteen years. Lahr chronicles Orton's working-class childhood and stagestruck adolescence, the scandals and disasters of his early professional years, and the brief, glittering success of his blistering comedies, Entertaining Mr. Sloane, Loot, and What the Butler Saw. Prick Up Your Ears is a watershed biography; it paved the way for Orton's revival and ensured his rightful place in the English repertoire.

Praised by the New York Times Book Review as "probably the most intelligent and insightful writer on the theater today," John Lahr has twice won the George Jean Nathan Award for Dramatic Criticism, most recently for his work at The New Yorker, where he writes about theater and popular culture. Mr. Lahr has written sixteen books, among them the novels The Autograph Hound (1973) and Hot to Trot (1974), and the nonfiction Notes on a Cowardly Lion: The Biography of Bert Lahr (California, 2000), Dame Edna Everage and the Rise of Western Civilisation (California, 2000), Light Fantastic: Adventures in Theater (1996), and The Orton Diaries (editor, 1986).
or
Not Currently Available for Direct Purchase