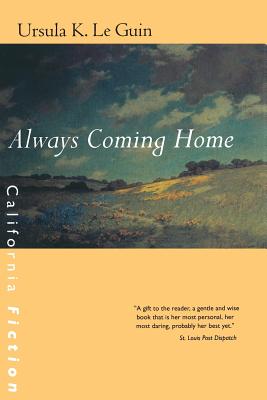 Ursula Le Guin's Always Coming Home is a major work of the imagination from one of America's most respected writers of science fiction. More than five years in the making, it is a novel unlike any other. A rich and complex interweaving of story and fable, poem, artwork, and music, it totally immerses the reader in the culture of the Kesh, a peaceful people of the far future who inhabit a place called the Valley on the Northern Pacific Coast.

"Ursula Le Guin is among the half-dozen most respected American writers who regularly set their narrative in the future to force a dialogue with the here and now, a dialogue generally called science fiction. . . . Always Coming Home is a slow, rich read, full of what one loves most in her work: a liberal utopian vision, rendered far more complex than the term 'utopian' usually allows for by a sense of human suffering. . . . With high invention and deep intelligence, Always Coming Home presents, in alternating narratives, poems and expositions, Ursula Le Guin's most consistently lyric and luminous book in a career adorned with some of the most precise and passionate prose in the service of a major imaginative vision."
— New York Times

"One of Le Guin’s most fascinating and underrated works: a sprawling exploration of a fictional people known as the Kesh, who lived in northern California hundreds of years in the future. . . . A novel, a scrapbook and an imaginary anthropological study in one . . . crammed with maps, stories, songs, recipes, poetry, charts and language guides."
— The Guardian

"Le Guin here focuses her inimitable world-building skills on two conflicting societies of the future—implying, of course, their relevance to the present . . . no one does this type of utopian near-allegory better."
— Kirkus Reviews

"This may be her masterpiece, a collage of documents and artifacts tracing the history of a future agrarian society that has grown out of the ruins of the industrialized past."
— Alta: Journal of Alta California

"An appealing book as well as a masterly one. . . . The future world she has created here is awesomely complex."
— Newsweek

"A gift to the reader, a gentle and wise book that is her most personal, her most daring, probably her best yet."
— St. Louis Post Dispatch

"Some stories are timeless, and can be located anywhere on earth, without the content being altered. Ursula Le Guin's enthralling new book is one of those."
— Minneapolis Star and Tribune

"The effect it has on the reader is hypnotic. . . . Le Guin has chosen a most original way to reveal this imagined land."
— People

"Always Coming Home is an act of discovery. . . . Everything Le Guin does is interesting, believable, and exquisitely detailed."
— Los Angeles Herald Examiner

Ursula K. Le Guin (1929-2018) was the author of novels, children's books, short stories, critical writings, and poetry. She was the winner of the National Book Award and the Nebula and Hugo awards for science fiction. She grew up in Berkeley and the Napa Valley and lived in Portland, Oregon.
Loading...
or
Not Currently Available for Direct Purchase