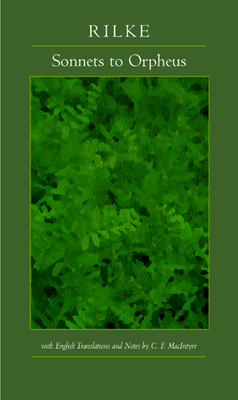 Written with astonishing rapidity in two weeks of February 1922, when Rilke was finally completing the Duino Elegies that had occupied him intermittently for a decade, Sonnets to Orpheus is a series of fifty-five brilliant and affirmative songs. It is in a sense a spontaneous creative dividend generated by a larger work. Because the sonnets were written only four years before Rilke's death, they belong properly to his final and philosophic period, and offer a sharp and striking contrast to the less mystical Das Buch der Bilder and Neue Gedichte.

Rainer Maria Rilke was one of Germany's most important poets. His influences include the paintings of the Worpswedders and the French Impressionists, the sculpture of Rodin (to whom he was both friend and secretary), and the poetry of Baudelaire, Verlaine, Mallarmé, and other symbolists. His poetry is innovative, enigmatic, and entertainingly idiosyncratic. C.F. MacIntyre's translations are both true to the original and poetic in their own right, and in each book he includes an introduction and notes. German text faces the English translation.

C.F. MacIntyre (d.1967) was well known as a translator. In addition to works by Rilke, he translated Goethe's Faust and many of the French symbolists: Nerval, Baudelaire,Verlaine, Corbière, Mallarmé, Rimbaud, Laforgue, and Valéry. His volumes of original poems include The Black Bull, Cafés and Cathedrals, and Poems.
Loading...
or support indie stores by buying on