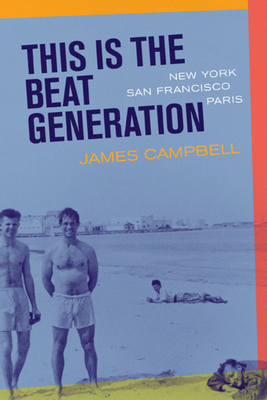 This Is the Beat Generation

Beginning in New York in 1944, James Campbell finds the leading members of what was to become the Beat Generation in the shadows of madness and criminality. Jack Kerouac, Allen Ginsberg, and William Burroughs had each seen the insides of a mental hospital and a prison by the age of thirty. A few months after they met, another member of their circle committed a murder that involved Kerouac and Burroughs as material witnesses.

This book charts the transformation of these experiences into literature, and a literary movement that spread across the globe. From "The First Cut-Up"--the murder in New York in 1944--we end up in Paris in 1960 with William Burroughs at the Beat Hotel, experimenting with the technique that made him notorious, what Campbell calls "The Final Cut-Up."

In between, we move to San Francisco, where Ginsberg gave the first public reading of Howl. We discover Burroughs in Mexico City and Tangiers; the French background to the Beats; the Buddhist influence on Kerouac, Gary Snyder, and others; the "Muses" Herbert Huncke and Neal Cassady; the tortuous history of On the Road; and the black ancestry of the white hipster.

Praise For This Is the Beat Generation: New York–San Francisco–Paris…

"What is it that imbues the Beats with such a mystical aura of glamour, and causes their lives, as much as their books, to be regarded as sacred texts of a particular school of non-conformism? These are the questions that James Campbell has addressed in this brilliantly sympathetic and compelling analysis of the Beat phenomenon."
— The Guardian

"The effect of reading this admirable account of the Beats is like looking down the wrong end of a kaleidoscope: the colourful flutter of fun seems a long way off but, if you narrow your eyes, still vivid and vital."
— The Spectator

"A hugely entertaining history . . . a simply terrific book. Racy, perceptive, and beautifully written. It is an indispensable addition to the library of books already written about the Beat Generation, and the perfect starting point for anyone who has ever wondered what the fuss was all about."
— Literary Review

"Literary biography serves the delightful function of providing its reader with a little lurid gossip, if not a critical history. Thankfully, James Campbell dishes out plenty of both in This Is the Beat Generation, wherein he chronicles one of the most (in)famous literary movements of the twentieth century. This book nicely illustrates, in a tone neither worshipful nor deploring, how resolutely the Beat movement was borne out of friendship, and is often less tiresome than reading actual beat writing."
— Flaunt

"The tale is anchored in a set of ideas, rather than merely a suite of personalities. Campbell’s breadth of reference is more deeply historical than is common in this field. He has an agreeable style, as well. . . . Campbell sorts out the story much more coherently, thoughtfully and skillfully than others with the same mission. He writes with genuine sympathy, though he’s not a Beat mythologizer. Nor a Beat debunker, either. He’s a Beat contextualizer."
— Vancouver Sun

"William S. Burroughs once wrote that the word 'hip' defies definition, 'because, if you don't dig what it means, no one can ever tell you.' He is probably right, but you would certainly have a better idea after reading James Campbell's sharp, dark, and often funny book. . . . Probably the best single book on the subject so far, this really is the Beat Generation."
— Sunday Times

James Campbell is the author of Exiled in Paris and Talking at the Gates: A Life of James Baldwin. He was born in Glasgow, Scotland, and was for many years an editor and columnist at the Times Literary Supplement in London.
Loading...
or support indie stores by buying on