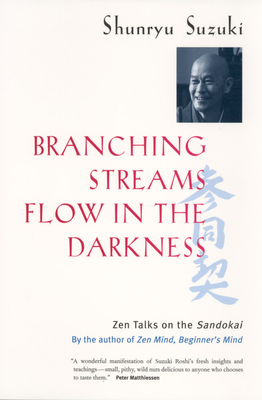 Branching Streams Flow in the Darkness

Zen Talks on the Sandokai

When Shunryu Suzuki Roshi's Zen Mind, Beginner's Mind was published in 1972, it was enthusiastically embraced by Westerners eager for spiritual insight and knowledge of Zen. The book became the most successful treatise on Buddhism in English, selling more than one million copies to date. Branching Streams Flow in the Darkness is the first follow-up volume to Suzuki Roshi's important work. Like Zen Mind, Beginner's Mind, it is a collection of lectures that reveal the insight, humor, and intimacy with Zen that made Suzuki Roshi so influential as a teacher.

The Sandokai—a poem by the eighth-century Zen master Sekito Kisen (Ch. Shitou Xiqian)—is the subject of these lectures. Given in 1970 at Tassajara Zen Mountain Center, the lectures are an example of a Zen teacher in his prime elucidating a venerated, ancient, and difficult work to his Western students. The poem addresses the question of how the oneness of things and the multiplicity of things coexist (or, as Suzuki Roshi expresses it, "things-as-it-is"). Included with the lectures are his students' questions and his direct answers to them, along with a meditation instruction. Suzuki Roshi's teachings are valuable not only for those with a general interest in Buddhism but also for students of Zen practice wanting an example of how a modern master in the Japanese Soto Zen tradition understands this core text today.


Praise For Branching Streams Flow in the Darkness: Zen Talks on the Sandokai…

"'In a sequel to his Zen Mind, Beginner's Mind, Shunryu Suzuki Roshi explores even more deeply the meaning and value of recognizing non-duality in our lives. . . . Suzuki Roshi's commentary on this difficult work is characteristically insightful. But it is the question and answer exchanges with his students, included at the end of each talk, that reveal his wisdom, humor and warmth to greater advantage."
— Shambhala Sun

"Branching Streams Flow in the Darkness is wonderful, simple, and bottomlessly deep, as Suzuki always is."
— Tricycle: The Buddhist Review

"These 13 talks provide a succinct overview of Suzuki's views on enlightenment, suffering, the big mind, the dangers of dualistic thinking, and the futility of knowing in the head what Zen is. . . . This is an essential resource for all devotees of Suzuki Roshi."
— Spirituality & Practice

Shunryu Suzuki Roshi came to the United States in 1959, leaving his temple in Yaizu, Japan, to serve as priest for the Japanese American congregation at Sokoji Temple in San Francisco. In 1967 he and his students created the first Zen Buddhist monastery in America at Tassajara in the coastal mountains south of San Francisco. Suzuki Roshi died in 1971 at age 67, a year and a half after delivering his teaching on the Sandokai. He may have had a premonition of his coming death when he said that it was common for Zen teachers in the Soto tradition to lecture on the Sandokai near the end of life.
Mel Weitsman is the former abbot of the San Francisco Zen Center and current abbot of the Berkeley Zen Center. Michael Wenger is Dean of Buddhist Studies at the San Francisco Zen Center.
Loading...
or support indie stores by buying on