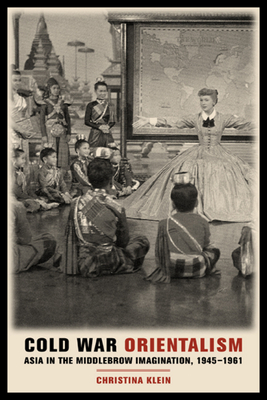 In the years following World War II, American writers and artists produced a steady stream of popular stories about Americans living, working, and traveling in Asia and the Pacific. Meanwhile the U.S., competing with the Soviet Union for global power, extended its reach into Asia to an unprecedented degree. This book reveals that these trends—the proliferation of Orientalist culture and the expansion of U.S. power—were linked in complex and surprising ways. While most cultural historians of the Cold War have focused on the culture of containment, Christina Klein reads the postwar period as one of international economic and political integration—a distinct chapter in the process of U.S.-led globalization.

Through her analysis of a wide range of texts and cultural phenomena—including Rodgers and Hammerstein's South Pacific and The King and I, James Michener's travel essays and novel Hawaii, and Eisenhower's People-to-People Program—Klein shows how U.S. policy makers, together with middlebrow artists, writers, and intellectuals, created a culture of global integration that represented the growth of U.S. power in Asia as the forging of emotionally satisfying bonds between Americans and Asians. Her book enlarges Edward Said's notion of Orientalism in order to bring to light a cultural narrative about both domestic and international integration that still resonates today.

Christina Klein is Associate Professor of Literature at the Massachusetts Institute of Technology.
Loading...
or support indie stores by buying on