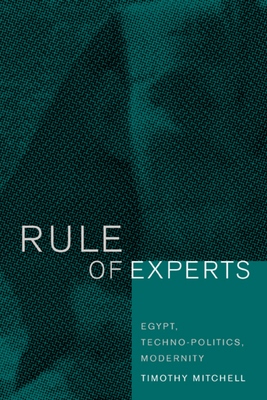 Can one explain the power of global capitalism without attributing to capital a logic and coherence it does not have? Can one account for the powers of techno-science in terms that do not merely reproduce its own understanding of the world?

Rule of Experts examines these questions through a series of interrelated essays focused on Egypt in the twentieth century. These explore the way malaria, sugar cane, war, and nationalism interacted to produce the techno-politics of the modern Egyptian state; the forms of debt, discipline, and violence that founded the institution of private property; the methods of measurement, circulation, and exchange that produced the novel idea of a national "economy," yet made its accurate representation impossible; the stereotypes and plagiarisms that created the scholarly image of the Egyptian peasant; and the interaction of social logics, horticultural imperatives, powers of desire, and political forces that turned programs of economic reform in unanticipated directions.

Mitchell is a widely known political theorist and one of the most innovative writers on the Middle East. He provides a rich examination of the forms of reason, power, and expertise that characterize contemporary politics. Together, these intellectually provocative essays will challenge a broad spectrum of readers to think harder, more critically, and more politically about history, power, and theory.

“Timothy Mitchell’s new book is brilliant. Written for academics . . . the writing is superb. The prose is luminous and limpid, undergirded by steely passion and resolve.”
— EPD: Society and Space

“Rule of Experts is the most exciting and intellectually stimulating book about the Middle East to come my way in a long time. It is a brilliant set of inter-related essays about late-19th- and 20th-century Egypt. . . . This book will surely be required reading for most students and faculty in Middle East studies.”
— International Journal of Middle East Studies

“Rules of Experts is the most significant collection of essays by a single author to be produced in contemporary Middle East social science in a generation. There is no one writing today in the field more important than Mitchell.”
— Middle East Journal

“The importance of this book goes well beyond the study of Egypt and the Middle East, making it a must read for everyone interested in the formations and effects of modern power.”
— Transforming Anthropology

Timothy Mitchell is Professor, Department of Middle East and Asian Studies, at Columbia University. His books include Colonising Egypt and Carbon Democracy.
Loading...
or support indie stores by buying on