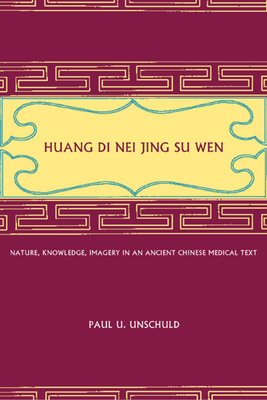 Nature, Knowledge, Imagery in an Ancient Chinese Medical Text: With an appendix: The Doctrine of the Five Periods and Six Qi in the Huang Di Nei Jing Su Wen

The Huang Di nei jing su wen, known familiarly as the Su wen, is a seminal text of ancient Chinese medicine, yet until now there has been no comprehensive, detailed analysis of its development and contents. At last Paul U. Unschuld offers entry into this still-vital artifact of China’s cultural and intellectual past.

Unschuld traces the history of the Su wen to its origins in the final centuries B.C.E., when numerous authors wrote short medical essays to explain the foundations of human health and illness on the basis of the newly developed vessel theory. He examines the meaning of the title and the way the work has been received throughout Chinese medical history, both before and after the eleventh century when the text as it is known today emerged. Unschuld’s survey of the contents includes illuminating discussions of the yin-yang and five-agents doctrines, the perception of the human body and its organs, qi and blood, pathogenic agents, concepts of disease and diagnosis, and a variety of therapies, including the new technique of acupuncture. An extensive appendix, furthermore, offers a detailed introduction to the complicated climatological theories of Wu yun liu qi ("five periods and six qi"), which were added to the Su wen by Wang Bing in the Tang era.

In an epilogue, Unschuld writes about the break with tradition and innovative style of thought represented by the Su wen. For the first time, health care took the form of "medicine," in that it focused on environmental conditions, climatic agents, and behavior as causal in the emergence of disease and on the importance of natural laws in explaining illness. Unschuld points out that much of what we surmise about the human organism is simply a projection, reflecting dominant values and social goals, and he constructs a hypothesis to explain the formation and acceptance of basic notions of health and disease in a given society. Reading the Su wen, he says, not only offers a better understanding of the roots of Chinese medicine as an integrated aspect of Chinese civilization; it also provides a much needed starting point for discussions of the differences and parallels between European and Chinese ways of dealing with illness and the risk of early death.

Paul U. Unschuld is Professor and Director of the Institute for the History of Medicine at Munich University. His books previously published by California include Medicine in China: A History of Pharmaceutics (1986), Nan-ching—The Classic of Difficult Issues (1986), Medicine in China: A History of Ideas (1988), and Essential Subtleties on the Silver Sea (with Jürgen Kovacs, 1998).
Loading...
or support indie stores by buying on