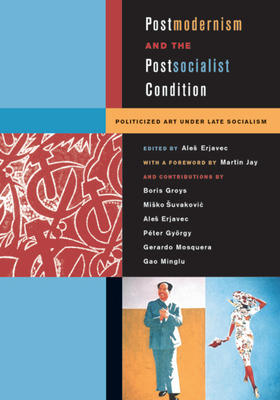 Postmodernism and the Postsocialist Condition (Hardcover)

The Berlin Wall was coming down, the Soviet Union was dissolving, Communist China was well on its way down the capitalist path; the world was witnessing political and social transformations without precedent. Artists, seeing it all firsthand, responded with a revolution of their own. What form this revolution took—how artists in the 1980s marked their societies' traumatic transition from decaying socialism to an insecure future—emerges in this remarkable volume. With in-depth perspectives on art and artists in the former Soviet Union, the Balkans and Mitteleuropa, China, and Cuba—all from scholars and art critics who were players in the tumultuous cultural landscapes they describe—this stunningly illustrated collection captures a singular period in the history of world art, and a critical moment in the cultural and political transition from the last century to our own.

Authors Ales Erjavec, Gao Minglu, Boris Groys, Péter György, Gerardo Mosquera, and Misko Suvakovic observe distinct national differences in artistic responses to the social and political challenges of the time. But their essays also reveal a clear pattern in the ways in which artists registered the exhaustion of the socialist vision and absorbed the influence of art movements such as constructivism, pop art, and conceptual art, as well as the provocations of western pop culture. Indebted to but not derived from capitalist postmodernism, the result was a unique version of postsocialist postmodernism, an artistic/political innovation clearly identified and illustrated for the first time in these pages.

Ales Erjavec is Professor and Research Director at the Institute of Philosophy, Scientific Research Center of the Slovenian Academy of Sciences and Arts in Ljubljana, Slovenia. His publications include K podobi (Towards the Image) (1996, 2002), and Ljubljana, Ljubljana: The Eighties in Slovene Art and Culture (1991, with Marina Grzinic).
or
Not Currently Available for Direct Purchase
Copyright © 2020 American Booksellers Association