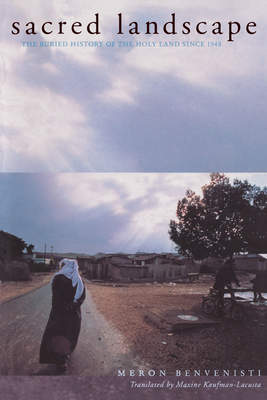 The Buried History of the Holy Land since 1948

As a young man Meron Benvenisti often accompanied his father, a distinguished geographer, when the elder Benvenisti traveled through the Holy Land charting a Hebrew map that would rename Palestinian sites and villages with names linked to Israel's ancestral homeland. These experiences in Benvenisti's youth are central to this book, and the story that he tells helps explain how during this century an Arab landscape, physical and human, was transformed into an Israeli, Jewish state.

Benvenisti first discusses the process by which new Hebrew nomenclature replaced the Arabic names of more than 9,000 natural features, villages, and ruins in Eretz Israel/Palestine (his name for the Holy Land, thereby defining it as a land of Jews and Arabs). He then explains how the Arab landscape has been transformed through war, destruction, and expulsion into a flourishing Jewish homeland accommodating millions of immigrants. The resulting encounters between two peoples who claim the same land have raised great moral and political dilemmas, which Benvenisti presents with candor and impartiality.

Benvenisti points out that five hundred years after the Moors left Spain there are sufficient landmarks remaining to preserve the outlines of Muslim Spain. Even with sustained modern development, the ancient scale is still visible. Yet a Palestinian returning to his ancestral landscape after only fifty years would have difficulty identifying his home. Furthermore, Benvenisti says, the transformation of Arab cultural assets into Jewish holy sites has engendered a struggle over the "signposts of memory" essential to both peoples.

Sacred Landscape raises troublesome questions that most writers on the Middle East avoid. The now-buried Palestinian landscape remains a symbol and a battle standard for Palestinians and Israelis. But it is Benvenisti's continuing belief that Eretz Israel/Palestine has enough historical and physical space for the people of both nations and that it can one day be a shared homeland.

Meron Benvenisti was deputy mayor of Jerusalem from 1971 to 1978, and is currently a columnist for Haaretz, Israel's largest newspaper. He is the author of Conflicts and Contradictions (1986) Intimate Enemies (California, 1995), and City of Stone (California, 1996).
or support indie stores by buying on
Copyright © 2020 American Booksellers Association