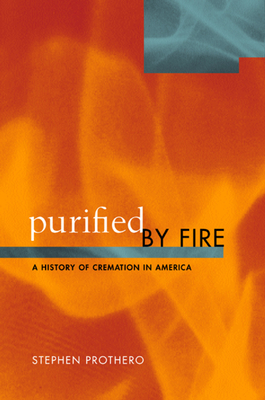 A History of Cremation in America

Just one hundred years ago, Americans almost universally condemned cremation. Today, nearly one-quarter of Americans choose to be cremated. The practice has gained wide acceptance as a funeral rite, in both our private and public lives, as the cremations of icons such as John Lennon and John F. Kennedy Jr. show. Purified by Fire tells the fascinating story of cremation's rise from notoriety to legitimacy and takes a provocative new look at important transformations in the American cultural landscape over the last 150 years.

Stephen Prothero synthesizes a wide array of previously untapped source material, including newspapers, consumer guides, mortician trade journals, and popular magazines such as Reader's Digest to provide this first historical study of cremation in the United States. He vividly describes many noteworthy events—from the much-criticized first American cremation in 1876 to the death and cremation of Jerry Garcia in the late twentieth century. From the Gilded Age to the Progressive Era to the baby boomers of today, this book takes us on a tour through American culture and traces our changing attitudes toward death, religion, public health, the body, and the environment.

Stephen Prothero is Associate Professor of Religion at Boston University, coeditor of Asian Religions in America: A Documentary History (1998), author of The White Buddhist: The Asian Odyssey of Henry Steel Olcott (1997), and coauthor of The Encyclopedia of American Religious History (1996).
Loading...
or support indie stores by buying on