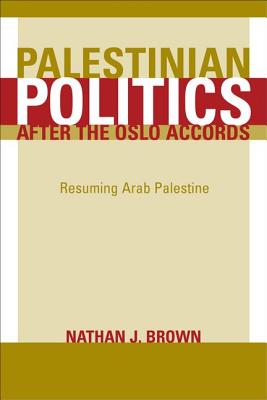 Palestinian Politics After the Oslo Accords

This timely and critically important work does what hostilities in the Middle East have made nearly impossible: it offers a measured, internal perspective on Palestinian politics, viewing emerging political patterns from the Palestinian point of view rather than through the prism of the Arab-Israeli conflict. Based on groundbreaking fieldwork, interviews with Palestinian leaders, and an extensive survey of Arabic-language writings and documents, Palestinian Politics after the Oslo Accords presents the meaning of state building and self-reliance as Palestinians themselves have understood them in the years between 1993 and 2002. Nathan J. Brown focuses his work on five areas: legal development, constitution drafting, the Palestinian Legislative Council, civil society, and the effort to write a new curriculum. His book shows how Palestinians have understood efforts at building institutions as acts of resumption rather than creation--with activists and leaders seeing themselves as recovering from an interrupted past, Palestinians seeking to rejoin the Arab world by building their new institutions on Arab models, and many Palestinian reformers taking the Oslo Accords as an occasion to resume normal political life. Providing a clear and urgently needed vantage point on most of the issues of Palestinian reform and governance that have emerged in recent policy debates--issues such as corruption, constitutionalism, democracy, and rule of law--Brown's book helps to put Palestinian aspirations and accomplishments in their proper context within a long and complex history and within the larger Arab world.

Nathan J. Brown is Professor of Political Science and International Affairs at The George Washington University. He is the author of Constitutions in a Nonconstitutional World: Arab Basic Laws and the Prospects for Accountable Government (2001), The Rule of Law in the Arab World: Courts in Egypt and the Gulf (1997), and Peasant Politics in Modern Egypt: The Struggle against the State (1990).
Loading...
or
Not Currently Available for Direct Purchase