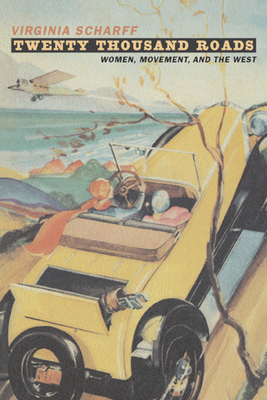 Women, Movement, and the West

From Sacagawea's travels with Lewis and Clark to rock groupie Pamela Des Barres's California trips, women have moved across the American West with profound consequences for the people and places they encounter. Virginia Scharff revisits a grand theme of United States history—our restless, relentless westward movement--but sets out in new directions, following women's trails from the early nineteenth to the late twentieth centuries. In colorful, spirited stories, she weaves a lyrical reconsideration of the processes that created, gave meaning to, and ultimately shattered the West.

This book powerfully and poetically shows us that to understand the American West, we must examine the lives of women who both built and resisted American expansion. Scharff remaps western history as she reveals how moving women have shaped our past, present, and future.

Virginia Scharff is Professor of History at the University of New Mexico. She is author of Bad Company (2002), Brown-Eyed Girl (2000), Coming of Age: America in the Twentieth Century (1998, with Michael Schaller and Robert Schulzinger), Present Tense: The United States since 1945 (1996, with Michael Schaller and Robert Schulzinger), and Taking the Wheel: Women and the Coming of the Motor Age (1991).
Loading...
or support indie stores by buying on