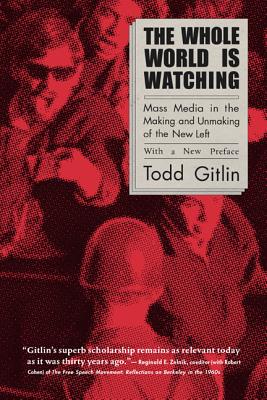 The Whole World Is Watching

Mass Media in the Making and Unmaking of the New Left

"The whole world is watching!" chanted the demonstrators in the Chicago streets in 1968, as the TV cameras beamed images of police cracking heads into homes everywhere. In this classic book, originally published in 1980, acclaimed media critic Todd Gitlin first scrutinizes major news coverage in the early days of the antiwar movement. Drawing on his own experiences (he was president of the Students for a Democratic Society in 1963-64) and on interviews with key activists and news reporters, he shows in detail how the media first ignore new political developments, then select and emphasize aspects of the story that treat movements as oddities. He then demonstrates how the media glare made leaders into celebrities and estranged them from their movement base; how it inflated the importance of revolutionary rhetoric, destabilizing the movement, then promoted "moderate" alternatives--all the while spreading the antiwar message. Finally, Gitlin draws together a theory of news coverage as a form of anti-democratic social management--which he sees at work also in media treatment of the anti-nuclear and other later movements.

Updated for 2003 with a new preface, The Whole World Is Watching is a subtle and sensitive book, true to the passions and ironic reversals of its subject, and filled with provocative insights that apply to the media's relationship with all activist movements.

Todd Gitlin is the author of ten books, most recently Media Unlimited: How the Torrent of Image and Sound Overwhelms Our Lives (2002). He is Professor of Journalism and Sociology at Columbia University.
Loading...
or support indie stores by buying on