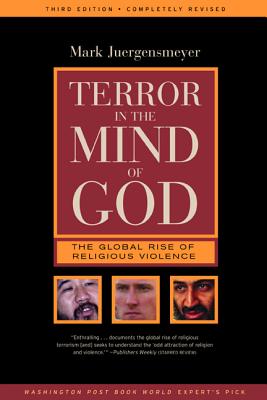 Terror in the Mind of God (Paperback)

Completely revised and updated, this new edition of Terror in the Mind of God incorporates the events of September 11, 2001 into Mark Juergensmeyer's landmark study of religious terrorism. Juergensmeyer explores the 1993 World Trade Center explosion, Hamas suicide bombings, the Tokyo subway nerve gas attack, and the killing of abortion clinic doctors in the United States. His personal interviews with 1993 World Trade Center bomber Mahmud Abouhalima, Christian Right activist Mike Bray, Hamas leaders Sheik Yassin and Abdul Azis Rantisi, and Sikh political leader Simranjit Singh Mann, among others, take us into the mindset of those who perpetrate and support violence in the name of religion.

Mark Juergensmeyer is Professor of Sociology and Director of Global and International Studies at the University of California, Santa Barbara. He is the winner of the prestigious Grawemeyer Award for 2003 in the religion category and the author of The New Cold War? Religious Nationalism Confronts the Secular State (California, 1993), and Gandhi's Way: A Handbook of Conflict Resolution (California, 2002), and editor of Global Religions: An Introduction (2003).
or
Not Currently Available for Direct Purchase
Copyright © 2020 American Booksellers Association