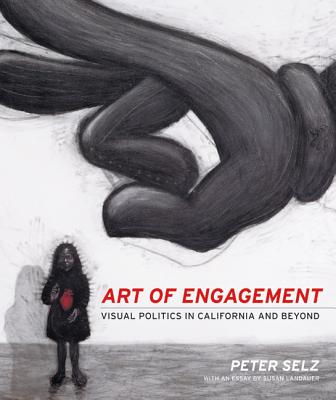 Visual Politics in California and Beyond

Art of Engagement takes the first comprehensive look at the key role of California's art and artists in politics and culture since 1945. Tracing the remarkably fertile confluence of political agitation and passionately engaged art, Peter Selz leads readers on a journey that begins with the Nazi death camps and moves through the Bay Area's Free Speech Movement of 1964, the birth of Beat and hippie countercultures, the Chicano labor movement in the San Joaquin Valley, the beginning of the Black Panther Party in Oakland, and some of the most radical manifestations of the women's movement, gay liberation, Red Power, and environmental activism. It also deals with artists' responses to critical issues such as censorship and capital punishment. Selz follows California's outpouring of political art into the present with responses to September 11 and the war in Iraq. In the process, Selz considers the work of artists such as Robert Arneson, Hans Burkhardt, Jerome (Caja), Enrique Chagoya, Judy Chicago, Llyn Foulkes, Rupert García, Helen and Newton Harrison, Wally Hedrick, Suzanne Lacy, Hung Liu, Peter Saul, Miriam Schapiro, Allan Sekula, Mark di Suvero, Masami Teraoka, and Carrie Mae Weems. Abundantly illustrated and beautifully produced, Art of Engagement showcases many types of media, including photographs, found objects, drawings and prints, murals, painting, sculpture, ceramics, installations, performance art, and collage. Readers will come away from the book with a historical sense of the significant role California has played in generating political art and also how the state has stimulated politically engaged art throughout the world.

Peter Selz is Professor Emeritus of the History of Art at the University of California, Berkeley. Among his many books are Nathan Oliveira (California, 2002), Barbara Chase-Riboud, Sculptor (1999), Beyond the Mainstream (1996), and Art in Our Times (1981). Susan Landauer is Kate and Drew Gibson Chief Curator at the San Jose Museum of Art and the author of many books.
or
Not Currently Available for Direct Purchase
Copyright © 2020 American Booksellers Association