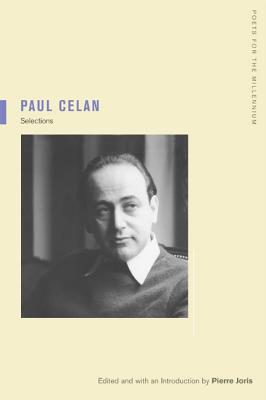 Selections (Poets for the Millennium #3)

The best introduction to the work of Paul Celan, this anthology offers a broad collection of his writing in unsurpassed English translations along with a wealth of commentaries by major writers and philosophers. The present selection is based on Celan's own 1968 selected poems, though enlarged to include both earlier and later poems, as well as two prose works, The Meridian, Celan's core statement on poetics, and the narrative Conversation in the Mountains. This volume also includes letters to Celan's wife, the artist Gisèle Celan-Lestrange; to his friend Erich Einhorn; and to René Char and Jean-Paul Sartre—all appearing here for the first time in English.

Praise For Paul Celan: Selections (Poets for the Millennium #3)…

“In this generous collection of Celan’s poetry, prose, and letters, Joris and his collaborators have done an excellent job of turning Celan’s work into English.”
— Forward Reviews

“One of Celan’s best translators [Joris] has gathered selections that span the poet’s career and represent seven translators. . . . This is a handy volume for those wishing to explore the work of a complex and visionary writer.”
— Bloomsbury Review

One of the greatest poets to write in German and among the most gifted writers of the twentieth century in any language, Paul Celan was born in Czernowitz, Bukovina, in 1920. He survived the Holocaust and settled in Paris in 1948, where he lived until his suicide by drowning in 1970. Pierre Joris is the author of many books of poetry as well as a range of anthologies and translations; he recently published A Nomad Poetics, a volume of essays. In 2003 he was Berlin Prize fellow at the American Academy in Berlin. He is Professor of English at the State University of New York, Albany.
Loading...
or support indie stores by buying on