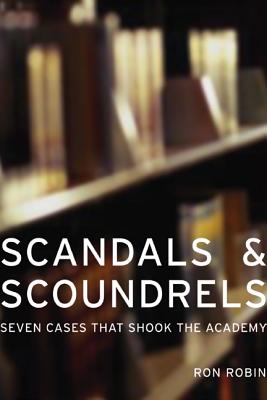 Seven Cases That Shook the Academy

Ron Robin takes an intriguing look at the shifting nature of academic and public discourse in this incisive consideration of recent academic scandals—including charges of plagiarism against Stephen Ambrose, Derek Freeman's attempt to debunk Margaret Mead's research, Michael Bellesiles's alleged fabrication of an early America without weapons, Joseph Ellis's imaginary participation in major historical events of the 1960s, Napoleon Chagnon's creation and manipulation of a "Stone Age people," and accusations that Nobel Peace Prize winner Rigoberta Menchú's testimony on the Maya holocaust was in part fiction. Scandals and Scoundrels makes the case that, contrary to popular imagery, we're not living in particularly deviant times and there is no fundamental flaw permeating a decadent academy. Instead, Robin argues, latter-day scandals are media events, tailored for the melodramatic and sensationalist formats of mass mediation. In addition, the contentious and uninhibited nature of cyberdebates fosters acrimonious exposure. Ron convincingly demonstrates that scandals are part of a necessary process of rule making and reinvention rather than a symptom of the bankruptcy of the scientific enterprise.

Ron Robin is Professor of History and Communication Studies and Dean of Students at the University of Haifa. He is the author of The Making of the Cold War Enemy: Culture and Politics in the Military Intellectual Complex (2001), The Barbed Wire College: Reeducating German POWs in the United States during World War II (1995), and Enclaves of America: The Rhetoric of American Political Architecture Abroad, 1900–1965 (1992).
Loading...
or support indie stores by buying on