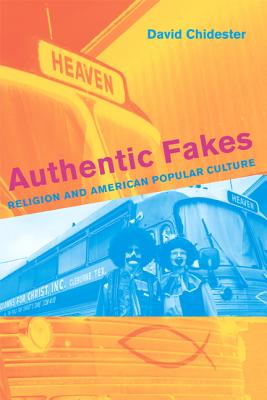 Authentic Fakes explores the religious dimensions of American popular culture in unexpected places: baseball, the Human Genome Project, Coca-Cola, rock 'n' roll, the rhetoric of Ronald Reagan, the charisma of Jim Jones, Tupperware, and the free market, to name a few. Chidester travels through the cultural landscape and discovers the role that fakery—in the guise of frauds, charlatans, inventions, and simulations—plays in creating religious experience. His book is at once an incisive analysis of the relationship between religion and popular culture and a celebration of the myriad ways in which invention can stimulate the religious imagination.

Moving beyond American borders, Chidester considers the religion of McDonald’s and Disney, the discourse of W.E.B. Du Bois and the American movement in Southern Africa, the messianic promise of Nelson Mandela’s 1990 tour to America, and more. He also looks at the creative possibilities of the Internet in such phenomena as Discordianism, the Holy Order of the Cheeseburger, and a range of similar inventions. Arguing throughout that religious fakes can do authentic religious work, and that American popular culture is the space of that creative labor, Chidester looks toward a future “pregnant with the possibilities of new kinds of authenticity.”

David Chidester is Professor of Comparative Religion at the University of Cape Town in South Africa, author of Christianity: A Global History (2000), Savage Systems: Colonialism and Comparative Religion in Southern Africa (1996), and Salvation and Suicide: Jim Jones, the Peoples Temple, and Jonestown (revised edition, 2003), and coeditor of American Sacred Space (1995). Savage Systems and Salvation and Suicide are winners of the American Academy of Religion Award for Excellence in Religious Studies.