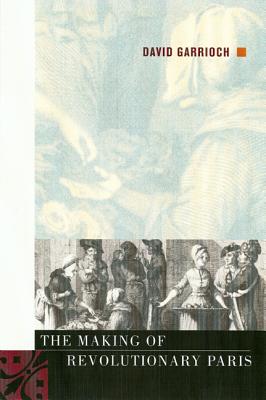 The Making of Revolutionary Paris

The sights, sounds, and smells of life on the streets and in the houses of eighteenth-century Paris rise from the pages of this marvelously anecdotal chronicle of a perpetually alluring city during one hundred years of extraordinary social and cultural change. An excellent general history as well as an innovative synthesis of new research, The Making of Revolutionary Paris combines vivid portraits of individual lives, accounts of social trends, and analyses of significant events as it explores the evolution of Parisian society during the eighteenth century and reveals the city's pivotal role in shaping the French Revolution.

David Garrioch rewrites the origins of the Parisian Revolution as the story of an urban metamorphosis stimulated by factors such as the spread of the Enlightenment, the growth of consumerism, and new ideas about urban space. With an eye on the broad social trends emerging during the century, he focuses his narrative on such humble but fascinating aspects of daily life as traffic congestion, a controversy over the renumbering of houses, and the ever-present dilemma of where to bury the dead. He describes changes in family life and women's social status, in religion, in the literary imagination, and in politics.

Paris played a significant role in sparking the French Revolution, and in turn, the Revolution changed the city, not only its political structures but also its social organization, gender ideologies, and cultural practices. This book is the first to look comprehensively at the effect of the Revolution on city life. Based on the author's own research in Paris and on the most current scholarship, this absorbing book takes French history in new directions, providing a new understanding of the Parisian and the European past.

Praise For The Making of Revolutionary Paris…

"Now that David Garrioch has written this superb synthesis of recent scholarship on eighteenth-century Paris, we should commission him to do a new edition every decade or so to keep the rest of us au courant. The bibliography is a catalog of all the best and most recent work on Paris, and the narrative flow is enhanced by small detours into oxbows of intellectual, political, and economic history as well as philosophical hypothesis and historical language analysis. Not only is this a useful and informative book; it also reminds us that history needs periodic rewriting and that tastes change. Garrioch’s book is testimony to the triumph of cultural history."
— Journal of Modern History

“Although, in recent years, much of the best work on the course of the French Revolution has focused on the provinces, the principal scholarship on its origins still focuses on Paris. . . . Garrioch’s book on Paris in the eighteenth century provides an informative, well-written survey of these developments that is firmly embedded in urban society.”
— Journal of Interdisciplinary History

"A well-documented and researched portrait of a city during a century of massive upheaval. . . . Garrioch is especially good at bringing the rythms of day-to-day life alive in this very readable academic study."
— The Age

"There can be few historians who possess Garrioch's command of the Parisian archives, or who have made so thorough a study of the vast and growing secondary literature on the city. His synthesis of these sources is presented in unfailingly concise and elegant prose, accompanied by a wealth of apt illustrations and photographs. This work will serve for years to come as an effective launching pad for further research."
— American Historical Review

David Garrioch is Associate Professor of History at Monash University, Australia, and author of The Formation of the Parisian Bourgeoisie, 1690-1830 (1996) and Neighborhood and Community in Paris, 1740-1790 (1986).
Loading...
or support indie stores by buying on