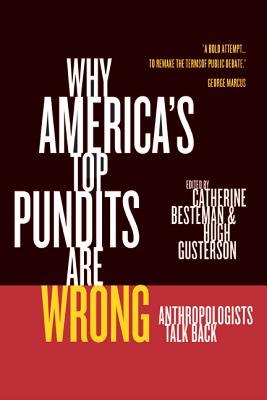 Why America's Top Pundits Are Wrong

In this fresh, literate, and biting critique of current thinking on some of today's most important and controversial topics, leading anthropologists take on some of America's top pundits.

This absorbing collection of essays subjects such popular commentators as Thomas Friedman, Samuel Huntington, Robert Kaplan, and Dinesh D'Souza to cold, hard scrutiny and finds that their writing is often misleadingly simplistic, culturally ill-informed, and politically dangerous. Mixing critical reflection with insights from their own fieldwork, twelve distinguished anthropologists respond by offering fresh perspectives on globalization, ethnic violence, social justice, and the biological roots of behavior. They take on such topics as the collapse of Yugoslavia, the consumer practices of the American poor, American foreign policy in the Balkans, and contemporary debates over race, welfare, and violence against women. In the clear, vigorous prose of the pundits themselves, these contributors reveal the hollowness of what often passes as prevailing wisdom and passionately demonstrate the need for a humanistically complex and democratic understanding of the contemporary world.

Catherine Besteman is Associate Professor of Anthropology at Colby College and author of Unraveling Somalia: Race, Violence, and the Legacy of Slavery (1999), among other books. Hugh Gusterson, Associate Professor of Anthropology and Science at MIT, is author of Nuclear Rites: A Weapons Laboratory at the End of the Cold War (California, 1996) and People of the Bomb (2004).
Loading...
or support indie stores by buying on